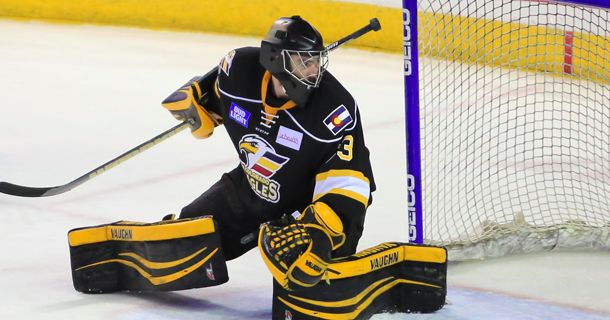 The 27-year-old third-year pro from Brockville, Ontario, ranks fifth in the ECHL in goals-against average (2.60), ninth in save percentage (.913), and is third in wins (28). Saunders is 28-7-1-1 in 38 games played with three shutouts for the Eagles and was named the Warrior Hockey ECHL Goaltender of the Month for the Month of February.

The 6-foot-2, 210-pound netminder played two seasons at the University of Alabama-Huntsville before transferring to the University of the North Dakota in 2012-13, the season after Sharks goaltender Aaron Dell graduated from UND.

The Barracuda return to SAP Center on Friday, March 31 (7:00 PM) to take on the Manitoba Moose for the third time this season and first in San Jose. Catch all the action on AM 1220 KDOW, www.kdow.biz and www.ahllive.com. Tickets are available at the SAP Center Box Office, at 408-999-5757, or online at SJBarracuda.com/tickets.