Hey, Barracuda fans! What’s going on? As you may have seen the ‘Cuda released their 2018 promo schedule today and if you’re a fan of throwback jerseys you can’t help but be pumped for what’s on tap for the upcoming season. The throwback series is going to be absolute fire. I’m a bit of a uniform nerd so bringing back all the former affiliate jerseys this year is going to be incredible.

Since the Barracuda will be honoring the Sharks affiliate history throughout the season by donning the old threads of the Kansas City Blades (IHL), Kentucky Thoroughblades, Cleveland Barons, Worcester Sharks, and San Jose Barracuda (orange), it got me thinking about some of my favorite NHL jerseys of all time and the ones I’d like to see teams bring back.

As a 90’s kid, I’m incredibly biased to the sweaters worn during that era, but it was a revolutionary time. The 90’s were all about vibrant colors, modern logos, and extreme patterns. 11 teams (San Jose ’91, Ottawa ’92, Tampa Bay ’92, Florida ’93, Anaheim ’93, Dallas ’93, Colorado ’95, Phoenix ’96, Carolina ‘97, Nashville ’98, Atlanta ’99) joined the National Hockey League in the 90’s and all of them introduced color schemes and patterns never imagined in the league prior. I know some organizations moved to new cities and rebranded (ex: Minnesota -> San Jose, Winnipeg -> Phoenix, Hartford -> Carolina) but you get the point.

The debate for the greatest jerseys of all-time could start and end with the Sharks original sweater they wore from 1991-98. Call me biased, but it checks all the boxes. Classic look, modern colors, and a epic logo. I’m not the only one who feels this way. It was voted the #1 jersey of all-time by Hockey News in 2015 (not a big deal).

I loved the heritage sweaters the Sharks wore two years ago, but unfortunately, the results weren’t great when they threw them on so, for now, they’re retired (again).

The original six teams haven’t changed much over the years, and that’s for the better. The uniforms are iconic and as identifiable as any in North American major sports so no need to talk too much about those clubs (PS: the best original six uniform is Chicago Blackhawks). Some teams in the NHL have already revealed third jerseys for the upcoming season, and I couldn’t be more pumped. The Coyotes announced earlier this summer the return of the legendary Kachina jerseys, and the Ducks are bringing back the purple Mighty Ducks jerseys. Just last week, the Vancouver Canucks announced the return of the flying skate logo and German-style color scheme. Even the Carolina Hurricanes have hinted at wearing Hartford Whalers jerseys at some point this season.

Let’s go down the list of NHL teams and the jersey’s I’d like them to bring back. You may disagree, but it’s my blog, so I’ll do what I want.

Anaheim Ducks – The Ducks distanced themselves from their original color scheme, logo and name (Mighty Ducks) after Disney sold the team in 2006 and although they won a Stanley Cup in the new look (gold, orange, black), they’ve never been the same since, in my opinion. I grew up on the movie series, cartoon show, Paul Kariya, etc. Love or hate the Ducks their original uniforms are some of the best of all-time. Anaheim revealed they’re bringing back the original as a third jersey to the delight of most hockey fans, including myself.

Arizona Coyotes – I’m not going to lie, I don’t hate the Coyotes current color scheme (maroon, black, white) but the original Picasso style Coyote logo was one of the best of all-time. What a time the 90’s were for uniforms, especially in the sun belt. The Coyotes, like the Ducks, are bringing back their originals (Kachina jerseys) this season as their third sweater.

Boston Bruins – As I mentioned, the original six unis are classic and don’t need any altering, but I wouldn’t mind if the Bruins brought back the bear-head crest alternate they wore from 1995-06.

Buffalo Sabres – I was never a huge fan of Buffalo’s red, white, silver and black look they wore from 1996-06, but it does remind me of their Cup run in 1999 with Dominik Hasek. It’s probably best they went back to the original blue and yellow scheme, it’s a classic.

Calgary Flames – The flames haven’t changed much over the years besides adding black in the late 90’s. The only change I think they should make is to bring back the original Lanny McDonald unis that included a yellow, white and red color scheme. Plain but sharp.

Chicago Blackhawks – Maybe bring back the black alternate but keep everything else the same. They’re as classic as classic gets.

Carolina Hurricanes – I like Carolina's current look. They brought back the black alternate uniform which will be a nice re-addition. If they rock the old Hartford Whalers threads, I’m 100% on board. On a side note, it should be the Seattle Whalers with the same uniforms. Those are some of the best of all-time and the mascot would be appropriate for the region. 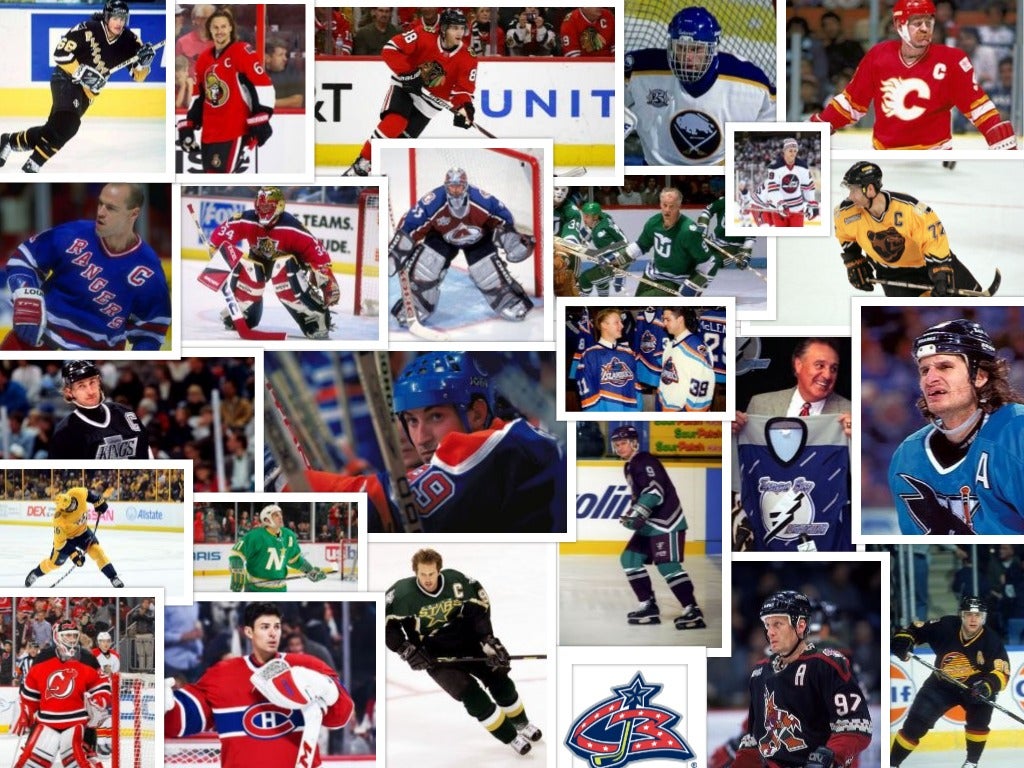 Colorado Avalanche – The Avs brought back their original look with the changeover to Adidas uniforms last year. It’s an upgrade from what they were wearing over the last decade.

Columbus Blue Jackets – The Jackets went to a cleaner look in 2007 when they dropped the lime green accent and revealed a new logo that incorporated the Ohio State flag. I like them, but part of me is partial to the original. I like the old C.B. logo with the green, but I may be the only one.

Dallas Stars – The Stars changed their color scheme in 2013 from forest green to what they call victory green. While I don’t hate the new look, the forest green jerseys they wore from the late 90’s to 2006 were epic. The outline formed a star which is like nothing else before it or after.

Edmonton Oilers – The Oilers made a great decision by going back to the Gretzky era threads on a full-time basis in 2011. This past year they morphed the two looks together by going from royal blue to dark blue but kept the orange instead of the gold they wore from 1996 to 2011. The mashup up works and still resembles the franchises most successful era.

Florida Panthers – I like the Panthers new look, and they held onto the original color scheme, but I loved their original logo. It reminds me of Pavel Bure and John Vanbiesbrouck, two legends in that organization.

Los Angeles Kings – Honestly, I don’t know if I like the Kings current look or not. Initially, I loved when they went away from the purple, silver and black and went back toward the Gretzky era with silver and black. But after a few years, I kind of miss the purple jerseys. They had more character than what they're currently wearing. The original gold and purple uniforms they rocked at the beginning of the franchise's existence were terrific and coincided with the Lakers, which gave the city a unified look (minus the Dodgers). Maybe I don't like their uniforms because they're the dreaded Kings, that could be it.

Minnesota Wild – Bring back the North Stars uniforms at least at an alternate.

Montreal Canadiens – Same as the Red Wings, their jerseys are classic and need no changes.

Nashville Predators – Among the teams that formed in the 90’s, Nashville is maybe the only that changed their original look for the better. They dropped silver in 2011 and went solely with yellow and dark blue, and it’s worked great.

New Jersey Devils – The Devils haven’t changed much since they dropped the green in '92 but I wouldn’t mind bringing back the originals from time to time or introducing a third black uniform. The Devils have never had a full-time third sweater.

New York Islanders – The Islanders went back to their original uniforms in the late 90’s after a brief stint where they wore teal, blue and orange fisherman jerseys from 1995-98. They had to go back to the originals, it was a no-brainer, and it sounds like the fan base couldn’t agree more, but I loved the fisherman uniforms. The font was crisp and almost looked warped, and the color scheme was different. Bring them back as a third? I think yes.

Ottawa Senators – Generally the Senators uniforms are the same as they’ve always been and they’re a bit boring in my opinion. I’m a little lukewarm on their overall look.

Philadelphia Flyers – The Flyers were the first NHL team to use orange, and their look hasn't changed much over the years. I would say they should bring back the Eric Lindros era black sweaters as an alternate. Those were sharp.

Pittsburgh Penguins – The Pens chose gold over yellow from 2000 until 2014, which I couldn’t stand it. They’re back to the black and yellow for the better. One suggestion, bring back the Jaromir Jagr era uniforms that read Pittsburgh from the right shoulder to the left hip.

St. Louis Blues – Again, I’m partial to the 90’s. I say bring back the Wayne Gretzky/Brett Hull blue, red, and yellow look with the slanted number font. I know the current blue and yellow color scheme is original, but it’s a little too bland for me.

Tampa Bay Lighting – In 2011 the lighting dropped the black and silver in their uniforms and went for a more classic and traditional look, choosing just blue and white as their primary colors. I do like their current jersey, but I want them to bring back the stormy third jerseys they debuted in 1997. It was like nothing ever worn in the NHL prior, and very much 90’s, I must say.

Vancouver Canucks – The Canucks are bringing back the flying skate, and I couldn't be happier. Pavel Bure was one of my favorite players as a kid, and this uniform reminds me of that era. The Canucks allowed fans to vote for the third uniform, and it is clear, the people have spoken in B.C.

Back by popular demand. #Canucks50 pic.twitter.com/uvCSMmiBZ8

Vegas Golden Knights – I wasn’t all that thrilled with the white gloves, but the look worked, and overall I like the uniform.

Washington Capitals – The Caps have to be red, white and blue. There are no questions, but they should bring back the black, blue and gold soaring eagle as a third.  Ovechkin began in those uniforms, so I tend to connect them with him and the great Olaf Kolzig.

Winnipeg Jets – The Jets current look is a bit too plain and conservative for me, but they did bring back some throwback heritage jerseys last year, which were terrific. If they mix those into the rotation frequently, I’m good with that.

On a side note, I'm taking a break from softball updates for the week. I can ensure you we won and the team is just hitting its stride at the right time. Got carried away with this uniform ranking so we'll get back to softball in next weeks blog.