What’s going on ‘Cuda Country? Hope you’ve had a great week. As promised last Thursday, no more softball talk, hockey is back. This week’s blog is all about puck and what to expect in LV this upcoming weekend for the Vegas Rookie Faceoff.

If you are unaware exactly what the Vegas Rookie Faceoff is all about, let me give you the Cliff Notes version. Every NHL organization participates in some sort of rookie showcase nowadays. It's a warmup before training camp and offers young players valuable playing experience against fellow U50’s (under 50 NHL games played). The biggest of these events is the Traverse City Rookie Tournament, which is entering its 20th year and is comprised of seven teams (Detroit, Chicago, Carolina, Columbus, Dallas, Minnesota, New York, and St. Louis).

(All games can be watched on SJSharks.com)

Traverse City actually coins a champion when it’s all said and done. No champ will be crowned this upcoming weekend in Vegas, but a lot can still be accomplished. First, the Sharks brass will be in full force, so the lights will be bright, which opens the door for players to make an impression. For example, Rudolfs Balcers had a stellar Development Camp last year, which resulted in a strong Rookie Showcase, and then he carried that to an All-Star rookie season in the AHL.

Last fall, the Sharks hosted the event at Solar4America Ice, but LA and LV were not involved. This year’s event will be comprised of six teams, San Jose, Arizona, Anaheim, Colorado, Los Angeles, and Vegas.

All San Jose U50’s were on the ice today on Thursday in San Jose, separated into two groups. One group was comprised of everyone going to Vegas, and the other group was more so the players who have already solidified themselves in the AHL and or have already played in the NHL, plus a couple of extras. 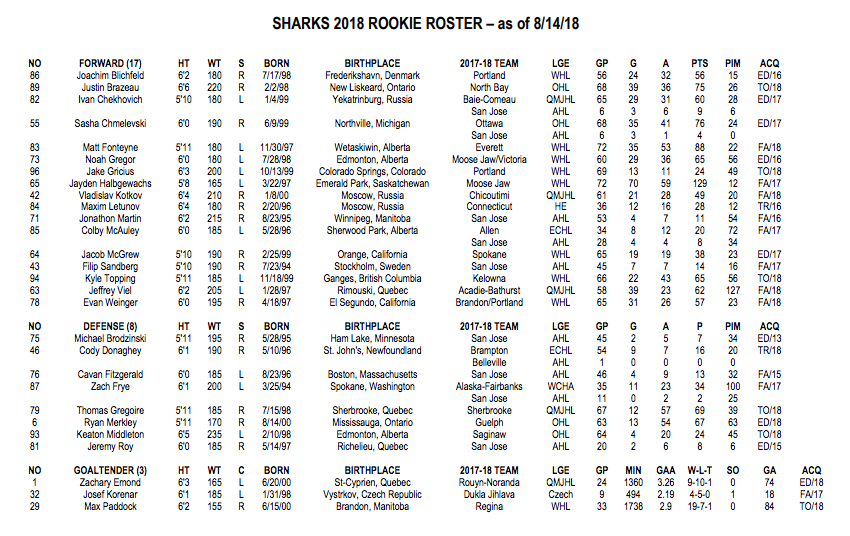 The team San Jose is sending the Sin City is inexperienced, which makes it all the more intriguing. It will not include the likes of Rudolfs Balcers, Tim Heed, Dylan Gambrell, Jake Middleton, Rourke Chartier, Tim Clifton etc., although the Sharks could have technically sent those players.

Of the 27 skaters on the Rookie Roster, 11 of them have AHL experience. But just four of those 11 (Jon Martin, Colby McAuley, Filip Sandberg, and Mike Brodzinski) have more than 10 pro games under their belt.

What to watch for in Vegas:

Filip Sandberg – Sandberg’s first season in North America was plagued by nagging injuries that forced him to miss 28 games throughout the AHL season. Sandberg’s proven production in the Swedish Hockey League made him an intriguing free agent for the Sharks last summer. He was coming off a dominant playoff run in the SHL that helped his club HV17 capture a league championship. All indications point to the winger being healthy and ready to go in 2018-19. Vegas will hopefully give Sandberg the momentum he needs to be ready to go for training camp and the upcoming year. I’m excited to see what he can do when he’s healthy.

After a scoreless second period, why not take some time to remember the third goal for the #SJBarracuda?

Jon Martin – Martin is entering the final year of his rookie contract. A physically dominating player in WHL during his junior career, the Winnipeg native made significant strides in his second year of pro a season ago, skating in 53 games for head coach Roy Sommer. Martin will need to continue an upward trajectory as he tries to climb up the prospect totem pole. It was clear on Thursday that Martin was taking a leadership role among the U50 group that’ll be traveling to Vegas. He should be able to stick out this weekend and may even wear the "C" as the team’s captain for the three games.

Michael Brodzinski – Brodzinki was essentially a rookie last season after splitting time between San Jose and Allen during his first year of pro in 2016-17. Brodz, like Martin, is in his final year of his entry-level contract and has a great chance to be in the Barracuda lineup on a regular basis this upcoming season, especially if Tim Heed, Jake Middleton and Radim Simek find themselves up with the big club a ton next season. To no surprise, Brodzinski had his best season of college hockey career at Minnesota during his junior season, his final year he played collegiately. I expect him to have a lot more confidence in year three, which should result in him making some big strides. Expect Brodzinski to cash in on the PP this weekend. He has that ability.

Josef Korenar – No more Troy Grosenick, Parker Gahagen or Stephon Williams. All indications point to Korenar Antoine Bibeau's back up with the 'Cuda in 2018-19. Korenar was signed by the Sharks after one season with the USHL’s Lincoln Stars in 2016-17. He spent last year in his native Czech Republic, playing for the country’s second top pro league. Korenar also showed well for the Czech’s at the U20 World Junior Championships last January.

Ryan Merkley – You can’t help but notice Ryan Merkley’s offensive prowess from the blueline. It’s the reason the Sharks selected him in the first round in last springs NHL Draft. Merkley is expected to go back to junior after training camp, but Vegas will be a good measuring stick for the young prospect.

Keaton Middleton – If the name sounds familiar it’s because it is. The not so little brother of Barracuda stud defender Jake Middleton, Keaton is a Maple Leafs draft pick that hopes to win a job with the organization, just like his older brother did two years ago. Middleton, who is six-foot-six, has been a captain for the OHL’s Saginaw Spirit the last two years.

The Free Agents – The Barracuda loaded up on undrafted free agent forwards from the Canadian Hockey League this past summer, signing CHL scoring champion Jayden Halbgewachs of the WHL’s Moose Jaw Warriors, Evan Weinger of the WHL’s Brandon Wheat Kings, Matt Fonteyne of the WHL’s Everett Silvertips, and Memorial Cup Champion Jeffrey Viel of the Acadie-Bathurst Titan in QMJHL. I want to see which one of these forwards makes the largest impact this weekend.

Other players to keep an eye out for: