2017 has finally come to an end, and what a year it was! A Pacific Division Crown, a 15-game winning streak, a trip to the Western Conference Finals, Coach of the Year, Goalie of the Year, Rookie of the Year, Coach Sommer earning victory number 700 and so on.

It was certainly fun describing it all from the broadcast booth. The good fortune continued on the first day of 2018, USA Hockey announced during the second intermission of the Winter Classic between the New York Rangers and Buffalo Sabres at Citi Field in New York, York York on Jan. 1 that San Jose Barracuda Captain John McCarthy had been selected to the United States men’s ice hockey team for the 2018 Winter Olympic Games.  The Olympics will be held from Feb. 9-25 in Pyeongchang, South Korea. 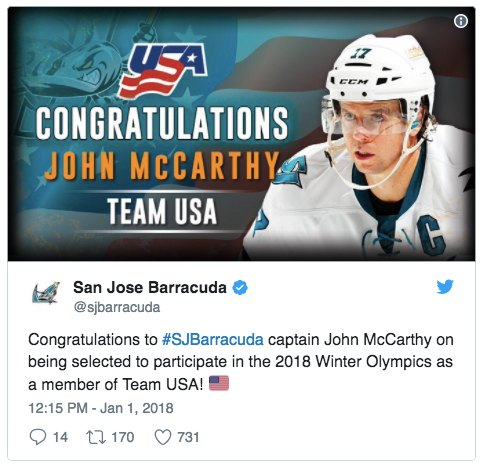 In April, the NHL said it would not participate in the Winter Olympics, opening the door for players who were not under NHL contracts. This offseason, McCarthy who is in his ninth year as a pro, signed a one-year AHL contract with the Barracuda.

On Monday, USA Hockey only announced one of its three goaltenders for the tournament, which means Barracuda goaltender Parker Gahagen still has a chance to make the Olympic Team. Gahagen who played four years at Army  is under the Army’s World Class Athlete Program, which grants elite soldier-athletes the opportunity to train for the Olympics while maintaining their military career. Gahagen is the first team-sport athlete to be awarded the status, which allows him to train with the Barracuda under amateur status. Over a four-year career at West Point, Gahagen appeared in 110 games for the Black Knights, posting a 40-49-16 record with a 2.60 goals-against average and a .926 save percentage. 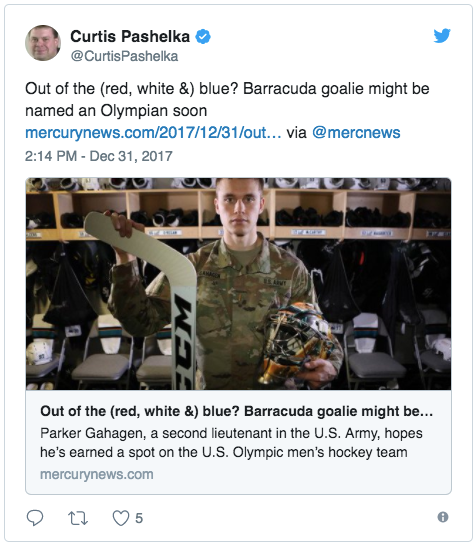