Hey Barracuda fans! Nick Nollenberger here. It’s another week, which means it’s time for another blog. The Sharks Prospect Tournament kicks off at Solar4America Ice this Saturday as the Sharks prospects will take on the Avalanche prospects at 4 PM on the north rink, and then the Coyotes and Ducks will do battle at 7 PM.

I won’t use the word 'battle' loosely, these tournaments are rugged and physical. Rosters are comprised of highly touted top draft choices and unproven invitees hoping to catch the attention of scouts and front office execs. That type of roster demographic is going to provide for a very exciting and intense four days.

I was hired last September, my first opportunity to meet the Sharks/Barracuda staff came at the Prospect Tournament in Denver, hosted by the Avalanche. I drove 10 hours from Odessa, Texas to Denver, Colorado, and then made my way out to California after the tournament. I don’t think the shock has rubbed off, I still feel so fortunate to be in the position, with this amazing organization. That trip will always be a great memory, and that tournament will always stick out in my mind.

This year, it will be an easier commute, and I won't have to worry about introductions, but I will have a bit more responsibility. As I announced in previous blogs, I’m going to have the honor of calling all three Sharks games for the tournament on a live stream that can be watched on sjsharks.com. I will also be calling a game on Tuesday between the Ducks and Avalanche, so let the studying begin.

I’m viewing the showcase as not only a massive opportunity, and honor, but as the biggest challenge of my broadcasting career, to date. Never have I had to prepare for four teams at once. Because the Barracuda played the Ducks (San Diego), Coyotes (Tucson), and Avalanche’s (San Antonio) AHL clubs last year, there are a few familiar names sprinkled throughout each roster, but most players will be wearing different numbers to coincide with their NHL teams numerical order.

People often ask me how I study for the opposing team and how I memorize the names of players. Every broadcasters approach is different, and I’m sure there are better ways than how I do it, but the brilliant thing about preparing for an opponent is there is no right answer.

When I first began calling hockey games in college, I would take a giant calendar and fill each block with a different player. I’d make the name and number bold and bright, and then I’d fill background info in dark pen below. I have now evolved to do everything on the computer so that I can save information for the next time, and it allows me to make the font really small (like size seven small). My spotting guide for Colorado, Arizona, and Anaheim is almost complete, so the tedious preparation is near done. I'll have to make a Sharks spotting chart as well since the roster is comprised of so many new names, with unfamiliar numbers. The spotting board is great, or as I call it the cheat sheet, for providing important info at my fingertips. It also gives me a bold roster that I can lean on if I forget a players name momentarily, but I still need to memorize the opposing team's names so I can raddle players names off quickly during the game. That’s where flash cards come in. After I’ve received a pronunciation guide and confirmed with the opposing team, I’ll make flash cards to create that memory.

There’s no real rocket science to preparing for any game, but it’s is methodical, and enjoyable, and exhausting all at the same time. Many times you don’t use more than 10% of the info you have, but the key is that you have it, and it can be used when called upon.

On a side note, the Sharks signed defenseman Jacob Middleton to a three-year, entry level deal. Well deserved, and so impressive because Middleton was signed to a tryout contract during training camp last year, and now he's got himself a three-year deal. Congrats, Midds!

Well, that's it from me. Hope to see you all this weekend. A reminder, Sunday’s game against Anaheim will be played at SAP Center at 3 PM. Parking and admission is completely free, so get your early-morning football fix in, and then come on down to the Tank and enjoy some much-needed hockey. For more information on tickets and the tournament CLICK HERE. Have a great week, and we’ll talk to you all next Thursday. 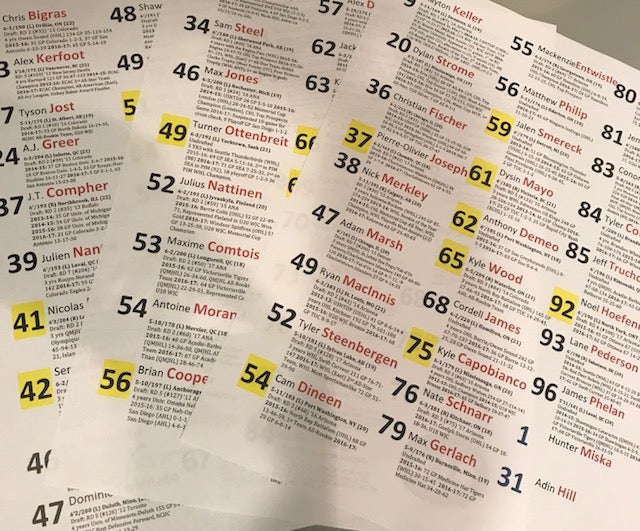