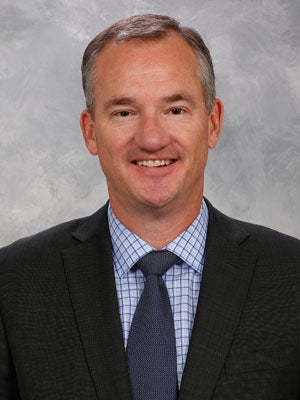 He is also responsible for overseeing all areas of operation for the Sharks Ice family of ice rinks, including Sharks Ice at San Jose, Sharks Ice at Fremont and the Oakland Ice Center, operated by Sharks Ice.

In addition, he is responsible for the merchandise operations for all of SSE’s properties, including the San Jose Sharks, San Jose Barracuda and Sharks Ice facilities.

Since 2000, Gustafson, 49, has served as Vice President and General Manager of the family of Sharks Ice rinks. Under his leadership, the operation has grown from one facility with two ice sheets to three facilities with seven ice sheets and increased revenues ten-fold. In June of 2013, the Jr. Sharks youth ice hockey program, which was founded by Gustafson and operates out of Sharks Ice, was named as a USA Hockey Model Program, one of only a handful of programs in the U.S. to receive the honor.

Gustafson, who serves on the board of directors for USA Hockey, works closely with organizations such as USA Hockey, USHL, NAHL, ISI and USF to bring national and world hockey events to San Jose. In April of 2016, Sharks Ice hosted the 2016 USA Hockey Boys Tier 1 U-16 and U-18 National Championships, the latest in a long line of national events to select the facility as the home for their events.  In 2009, Gustafson was named the International Ice Skating Institute’s “Facility Operator of the Year.”

From 1996-1999, Gustafson served as general manager and vice president of operations for the San Jose Rhinos of Roller Hockey International (RHI). The team, which played their home games at SAP Center at San Jose, won the Murphy Cup as league champions in 1995 and Gustafson was named RHI “Executive of the Year” in 1999.

A former goaltender, Gustafson spent five seasons playing with various teams in the AHL, ECHL, CHL, WCHL and IHL. On April 15, 1992, he dressed as the back-up goaltender to Grant Fuhr for the Toronto Maple Leafs at Maple Leaf Gardens in a 4-2 win over the New York Rangers. The Fort Frances, Ontario native also played collegiately for four seasons at Colorado College.