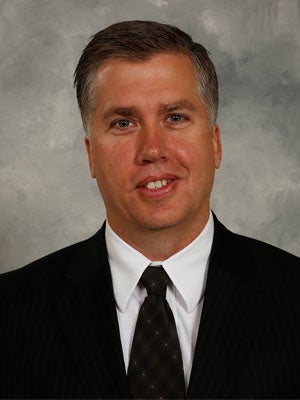 In addition, as general manager of the San Jose Barracuda, he oversees all the hockey operations for the Sharks American Hockey League affiliate, including player evaluation, player contracts, and player recall and reassignments.

In an effort to strengthen the organization’s player development system and program, the Sharks relocated their American Hockey League affiliate to San Jose for the 2015-16 season. The Barracuda became a part of the AHL’s new Pacific Division, sharing SAP Center with their NHL parent club. The move west eliminated the need to fly players across the United States in the event of recalls and reassignments and added valuable practice time. It also has allowed for greater interaction and observation from San Jose’s development coaches.

One of his most important duties involves the tracking, analyzing and projecting of the team’s player payroll relative to the current and future National Hockey League salary cap to give the team the financial flexibility to ice a championship-caliber team each season.

Will, 53, also works with the organization’s professional scouts and management team in player research for expansion, waivers, free agency and trades. His expert analysis of economic trends in the NHL has led to the Sharks acquisition and retention of several key veteran players over his time with the club.

Prior to his current roles, Will served as the team’s director of hockey operations from 2004-2011. A member of the Sharks organization since the franchise’s inception in July 1990, he has also previously served as assistant to the general manager and scouting coordinator.

The Bloomington, Minn. native also works with director of scouting Tim Burke in the development and implementation of draft prospect testing, draft table operations and computer scouting analysis. Will is an integral part of the team’s draft-day strategy. Without his coordinating efforts, the team would not have drafted 2001 Calder Memorial Trophy winner Evgeni Nabokov in 1994. In addition, he developed the Sharks computer scouting program that pioneered the advent of scouting programs now used throughout the NHL.

Prior to joining San Jose, Will spent six years in the Minnesota North Stars organization in various capacities. 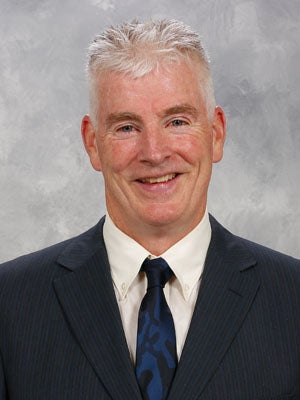 On Dec. 11, 2019, Sommer joined the Sharks' coaching staff as an associate coach. His previous NHL coaching experience had come with the Sharks from 1996-1998 as an assistant under then Head Coach Darryl Sutter. As a player, Sommer's career spanned 10 seasons after being drafted by the Toronto Maple Leafs in 1977, scoring a goal in his NHL debut with Edmonton in 1981 and winning a Calder Cup with the Maine Mariners in 1984. 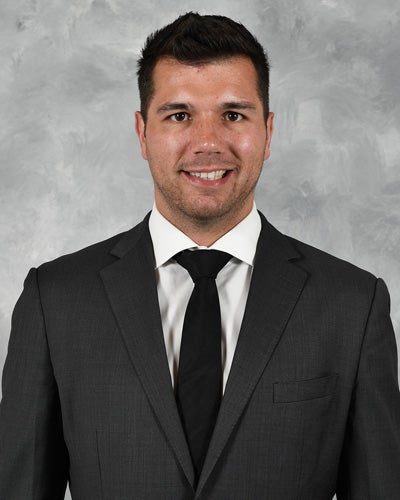 Upon Sommer joining the Sharks coaching staff in Dec., Jimmy Bonneau and Michael Chiasson served as co-coaches for the Barracuda for the team's final 33 games in 2019-20. During that span, the Barracuda finished with a 12-16-5 record, including a season-long six-game point streak (4-0-2) before the season was canceled due to the COVID-19 pandemic.

Bonneau, 35, enters his third season in 2020-21 as an assistant coach for the Barracuda, after serving as a co-coach, along with Chiasson, in the team's final 33 games of last season.

Before his coaching career, Bonneau played 11 seasons with various clubs in the AHL and ECHL. For four seasons, he played with the Worcester Sharks, including a stint as an alternate captain during the 2013-14 season, scoring five goals, nine assists and 435 penalty minutes in 155 games. He finished his AHL career with 30 points (11 goals, 19 assists) and 988 penalty minutes in 350 career games. 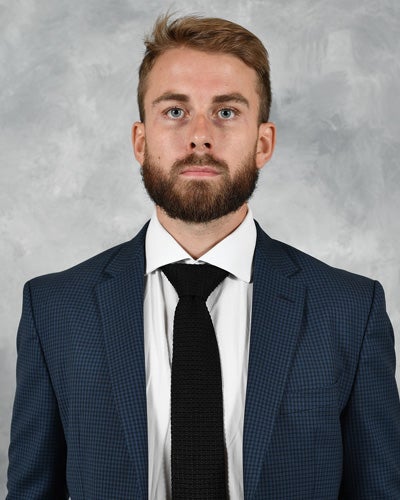 Chiasson, 29, enters his third season in 2020-21 as an assistant coach for the Barracuda, after serving as a co-coach, along with Jimmy Bonneau, in the team's final 33 games of the campaign this past year, going 12-16-5, including a season-long six-game point streak (4-0-2) before the season was canceled due to the COVID-19 pandemic..

Before his coaching career, Chiasson played for Åmäl SK in Sweden's Division 2 league during the 2015-16 season, collecting 24 points (five goals, 19 assists) in 28 games. He played collegiately at the University of Michigan, recording three goals, 13 assists, 47 penalty minutes, and a plus-14 rating in 86 games while studying Sport Management.

Prior to joining the Barracuda coaching staff, both Bonneau and Chiasson were members of the Sharks scouting department. 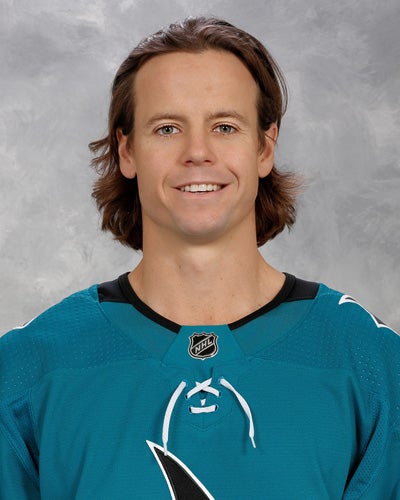 2021-21 will mark John McCarthy's first as an AHL Development Coach for the Barracuda. On Dec. 27, 2019, the 33-year-old (at the time) made his coaching debut with the Barracuda as an assistant coach against the Stockton Heat after announcing his retirement from pro hockey earlier in the day. On Dec. 10, McCarthy suffered an Ischemic stroke due to a previously undetected hole in his heart. Following swift medical attention from the team’s medical staff and the physicians at Kaiser Permanente, McCarthy was stabilized and has made a complete recovery.

McCarthy, who was selected by the Sharks in the seventh round of the 2006 NHL Draft, holds all major Barracuda franchise records including games played (275), goals (62), assists (76), points (138), power-play goals (17), and shorthanded goals (5).  He has served as the Barracuda team captain since 2016 and also served as captain of the Worcester Sharks for the 2012-2013 season.

He also posted 11 points (three goals, eight assists) in 27 playoff games with the Barracuda over the past four seasons.

In 2018, McCarthy was selected to the United States Men’s Olympic Ice Hockey Team, appearing in five games at the Pyeongchang Olympics.

Prior to his professional career, McCarthy spent four seasons at Boston University where he won a 2009 National Championship as one of the team’s Co-Captains. 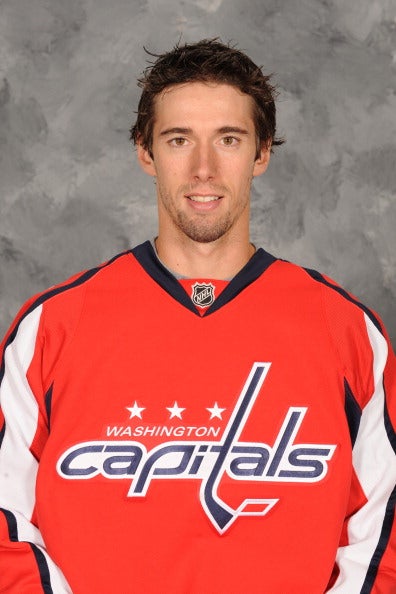 In 2020-21, Dany Sabourin, 40, enters his first season as goaltending development coach for the organization. Prior to this past year, Sabourin had been the goaltending coach for the QMJHL's Rouyn-Noranda Huskies where he coached Sharks 2018 draft pick Zachary Emond and helped guide the Huskies to the 2019 Memorial Cup.

A 1998 fourth round pick by the Calgary Flames, Sabourin played parts of 17 professional seasons in the ECHL, AHL, NHL, EBEL (Austria) and Ligue Magnus (France), with his final year coming in 2016-17 as a member of the Rouen Dragons (France). In 2005-06, the Val-d'OR, Quebec, Canada native won the AHL's Baz Bastien Memorial Award the league's best goaltender.

In 57 career NHL games between Calgary, Pittsburgh, and Vancouver, Sabourin went 18-25-4 with a 2.88 goals-against average and a .898 save percentage. 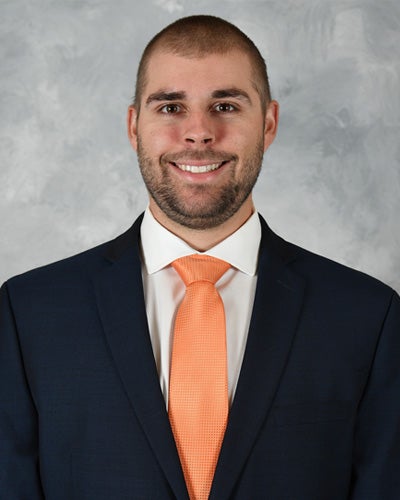 Nick Gialdini enters his fifth season as video coach for the Barracuda in 2020-21 after spending the previous three seasons assisting the Sharks scouting department in various capacities.

Gialdini joined the Sharks organization after playing hockey in the Jr. Sharks youth hockey system. He spent nine years as a youth hockey coach, most recently with the Jr. Sharks 18AAA team, and has served as high school hockey coordinator for four years at Sharks Ice at San Jose.

Gialdini, a San Jose native, graduated from San Jose State University in 2016 where he played one season of club hockey, appearing in the ACHA Division 2 National Championships.

Luke Chilcott returns for his sixth season as Skating Coach for the San Jose Barracuda. Chilcott develops a deeper knowledge of edge work and efficiency through correct technique and assist players in analyzing beneficial equipment as it relates to their performance. He has assisted Sharks prospects with their skating technique at the annual development camp for the past four season and became the official Skating Coach of the Sharks last year. Chilcott founded CSM, Chilcott Skating Mechanics, which he owns and operates out of the Dallas/Fort Worth area. He works privately with students, as well as with small groups and teams, on facilitating efficient skating technique through helping players understand proper biomechanics. Teams Chilcott has worked with include the Tier 1 Dallas Stars Girls Elite team, which is currently one of the United States top Girls Travel Hockey programs, and an organization in McKinney, Texas that fields an A and AA teams at every level. Chilcott has won two national championships at the novice and primary levels of figure skating and went on to compete at the junior and senior standards of the sport. He competed internationally for Great Britain and skated up to the world championship level. Born in England, Chilcott currently resides in Dallas, Texas 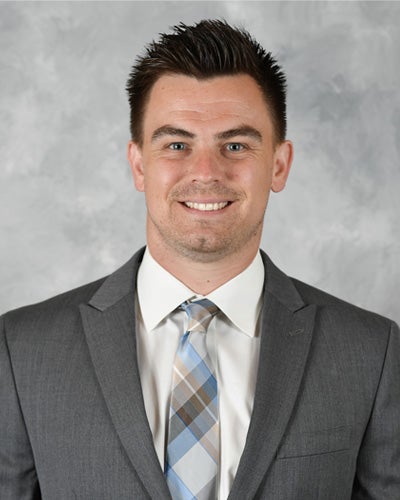 San Jose native Will Leonard enters his third season with the San Jose Barracuda in 2020-21 as the team’s Head Athletic Trainer after serving as an intern with the Sharks under Ray Tufts in 2009-10. Prior to joining the Barracuda, Leonard worked at Notre Dame High School in downtown San Jose for the last four years, assisting all 10 of the school’s varsity sports. Following his internship with the Sharks, Will continued to help out the organization during training camp and development camp.

Leonard resides in San Jose with his wife Sara, daughter Taylor and his three dogs. 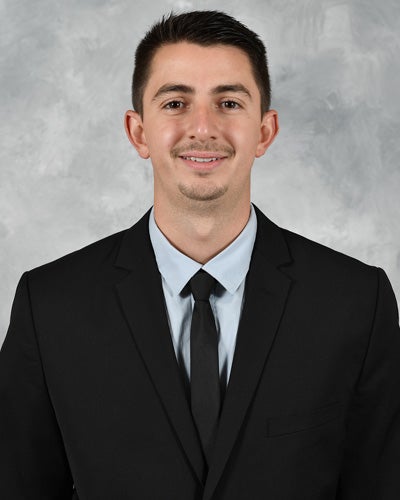 San Jose native Gianluca Scotuzzi returns for his fourth season with the San Jose Barracuda in 2020-21 and his second as the team’s Assistant Athletic Trainer.

Scotuzzi graduated in 2016 with a Bachelors’ of Science degree in Kinesiology with emphasis in Athletic Training from San Jose State University. Scotuzzi is currently continuing his education at San Jose State University in pursuit of a Master’s degree in Kinesiology with a concentration in Athletic Training and is set to graduate in May 2019. 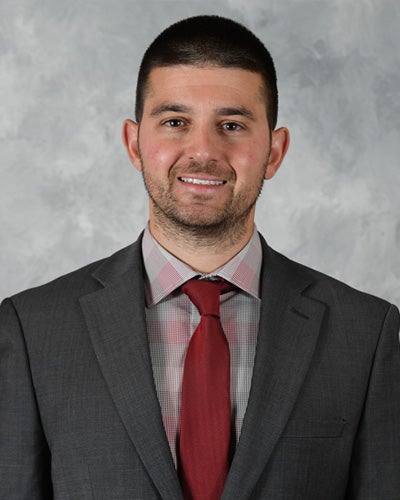 The Merced, CA native graduated from Fresno State University with a degree in kinesiology in 2010. He currently resides in Morgan Hill, CA with his wife Delise and his daughter Amorette. 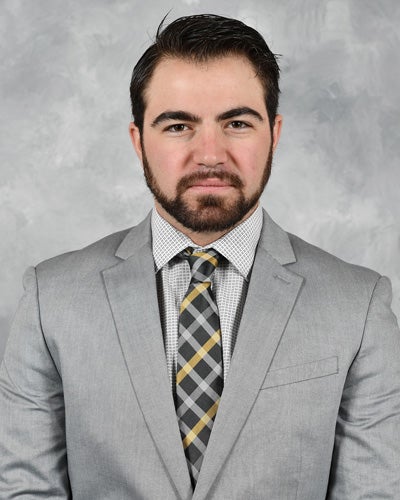 Mike Murphy begins his fourth season on the Barracuda equipment staff in 2020-21 and his third as Head Equipment Manager. Murphy spent the previous season as the Assistant Equipment Manager for San Jose and was with the the Macon Mayhem of the Southern Professional Hockey League (SPHL) prior to that.

While at Canisius (NCAA DI), Murphy was the hockey teams head equipment manager for a pair of seasons (2014-16) in a Graduate Assistantship role. In 2015-16, Mike also worked for the Buffalo Beauts of the National Woman’s Hockey League (NWHL) during the league’s inaugural season.

Prior to his time at Canisius, Murphy spent one season at American International College (NCAA DI) as the hockey teams head equipment manager after earning his undergrad from the University of New England where he began his career while in school. 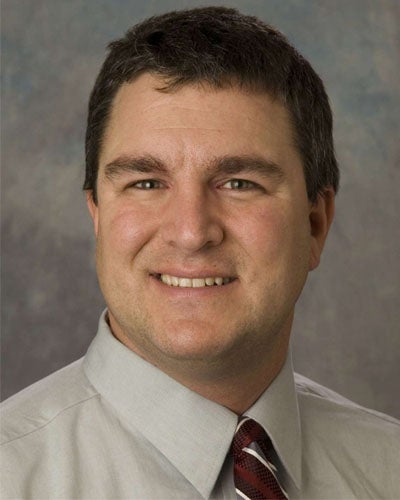 The next three years were spent on Active Duty with the US Air Force. During this time, he was appointed as a clinical professor in surgery at the Uniformed Services University of the Health Sciences. Additionally, he obtained his MBA in Health Care Administration from Touro University.

After his honorable discharge, he spent an additional year in a Sports Medicine fellowship at Sports Orthopedic and Rehabilitation (SOAR) where he worked with world-class athletes including those on the San Francisco 49ers and San Francisco Giants. Dr. Abene currently cares for athletes at San Jose State University.  Dr. Abene also worked with the San Jose Ballet and is the medical advisor for the Jr. Sharks youth hockey program. He is a fellow of the American Academy of Orthopaedic Surgeons and the American Orthopaedic Society of Sports Medicine. Dr. Abene is currently an orthopaedic surgeon at Kaiser Permanente San Jose. 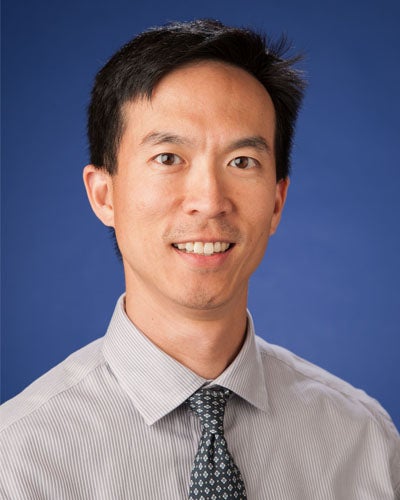 Dr. Yu is a board certified emergency physician at Kaiser-Permanente.  He earned bachelors and masters degrees from Stanford University, where he graduated with honors, as well as medical and graduate business degrees from Columbia University in 2001.

His sports involvement over the years has spanned track and field, volleyball, skiing, golf, and ice hockey.