For the fifth time in the team’s six-year history, the Barracuda reached the AHL playoffs in 2020-21, using 40 different skaters and four different goalies to get there. After wins over the Tucson Roadrunners, 2-1, and the Colorado Eagles, 5-1, in single-elimination play-in action, the Barracuda were eventually eliminated by the Henderson Silver Knights in a best-of-three Divisional Semifinal series (0-2) in Las Vegas.

After a delayed start to the 2020-21 AHL season due to COVID-19, the Barracuda was forced to conduct training camp in Arizona due to health and safety protocols implemented by Santa Clara County.

The ⁦@sjbarracuda⁩ got stuck in the Texas winter storm, nearly tipped over a 100ft overpass + ate frozen pizza & Uncrustables for days.

Here’s the story of an unforgettable hockey road trip.

”They went through a lot. But they held up pretty good.” https://t.co/fYIwmTJqK0

Originally set to play seven exhibition games, the team would only get through two periods of its sixth preseason game before it was canceled due to a positive COVID test on the team. Although it would turn out to be a false positive, the Barracuda was forced to quarantine in a Las Vegas hotel for two days before returning to Arizona. This resulted in the cancellation of the team’s final exhibition game and the first regular-season game against Tucson on Fri., Feb. 5.

The Barracuda finally got the 2020-21 regular season underway on Sat., Feb. 6 at Tucson, ending a 333-day gap between games. Serving as the home team, the Barracuda dropped its first two outings of the seasons against the Roadrunners. Searching for their first win of the year, the team hit the road for a three-game set against the Texas Stars, marking the first matchup against the Dallas’ affiliate since the 2018-19 season.

Days before the Barracuda arrived in the Lone Star State, Texas began to experience unseasonably freezing temperatures caused by a “polar vortex”. The Barracuda would get through the first two games of the series on Fri., Feb. 12 and Sat., Feb. 13, with each team earning a 5-3 win. But the third game, which was pinned for Tues., Feb. 16, would be postponed as the weather continued to take a dramatic turn. Even the Dallas Stars, who were three hours north, were forced to postpone several games as the state experienced ongoing power issues caused by the weather. In an attempt to fly back to Arizona from Austin, the Barracuda loaded up the team bus and inched their way to the airport on the morning of Wed., Feb. 17, only to have its flight canceled just minutes before the team arrived. Eventually, after arriving a week prior, the team was able to catch a flight out of Houston on Thurs., Feb. 18. ESPN’s Emily Kaplan documented the “Barracuda’s unforgettable road trip” and all that transpired over those seven days.

Scheduled to play three more games in Tucson before being able to return to San Jose for the first time all season, the Barracuda got word on their way to the Houston airport that the Roadrunners had multiple COVID cases, prompting the cancellation of the next three games, and in turn, the team was allowed to fly home to San Jose earlier than expected.

The Barracuda was scheduled to play their first game in San Jose on Thurs., Feb. 25 against the Bakersfield Condors but a positive COVID test on the Sharks forced the entire organization to temporally suspend operations. So, on Sat., Feb. 27, after a 357-day layoff, the Barracuda finally played their first home game of the season, which was conducted at Solar4America Ice against the Ontario Reign. After allowing three first-period goals, the Barracuda would score the next six in the final two periods en route to a 6-3 win. In 2020-21, due to COVID protocols, the Barracuda split their home schedule between their practice facility, Solar4America Ice at San Jose, and the SAP Center at San Jose. On Tues., March 16, the Barracuda played their first game at the Shark Tank, falling 3-2 to the Condors in overtime.

Once the team returned to the Bay Area, the Barracuda went 6-0-1-1 in their first eight games on home ice and did not lose a game in regulation in San Jose until Tues., April 13, 7-2 vs. Texas.

At two different points during the season, the Barracuda won three games in a row in, including back-to-back wins against the Division’s top two clubs, Henderson and Bakersfield, on Tues., April 27 and Fri., April 30. 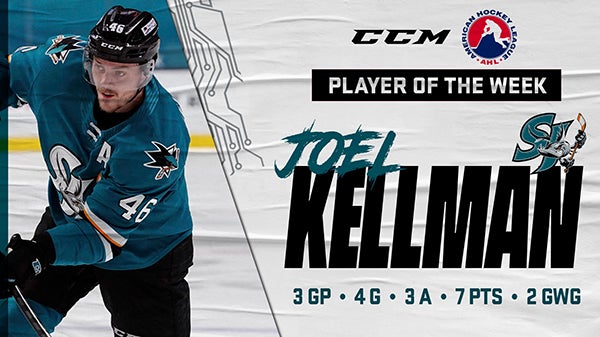 The Barracuda’s 7-5 win over the Silver Knights on April 30 saw several new franchise watermarks, including the team going a perfect five-for-five on the power play and Joel Kellman and Robbie Russo finishing with single-game team-highs in points (3+2=5) and assists (4). The hat trick for Kellman was the Barracuda’s first since Dec. 12, 2019 (Trevor Carrick) and eighth in franchise history. Kellman was named CCM/AHL Player of the Week for the period ending on May 2, 2021, as he collected four goals and three assists in a three-game stretch.

In total, 21 different skaters appeared in at least one game with the Barracuda and the Sharks in 2020-21, the second-most ever and the most since the 1992-93 season (Kansas City Blades). In addition, six different players began the season in the AHL before making their NHL debuts.

In his first season in San Jose, Jaycob Megna donned the “C” as the team’s third captain in franchise history, replacing John McCarthy who retired due to health reasons the season prior after serving as team captain from 2016-19. Among team defensemen, Megna finished first on the team in shots (55), game-winning goals (1), unassisted goals (2), tied for first in plus/minus (+8), tied for third in goals (2), fourth in points (8) and fifth in assists (6).

In 2020-21, the Barracuda was one of the league’s youngest rosters, with an average age of 22.60 years old. Younger than three different NCCA DI teams. 17 different rookies appeared in a game at various points in the season and Ozzy Wiesblatt (3/9/02) became the youngest player in franchise history to appear in a game when he made his AHL debut on Feb. 7, 2021 vs. Tucson and became the youngest player to score a goal on Feb. 13 at Texas.