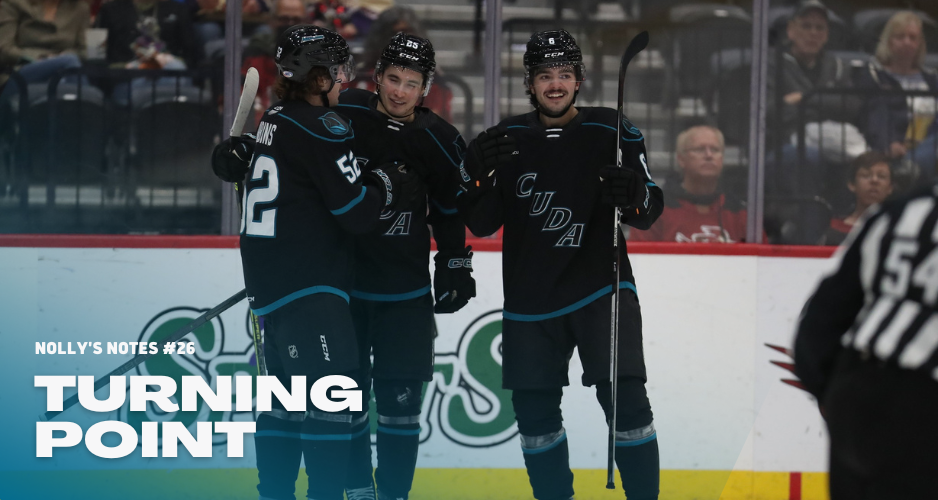 Hello, Cuda Country! Happy Thanksgiving week. I’m writing this blog from a makeshift training room inside the Center Ice Arena in Ontario. The team is practicing here today before its game on Wednesday against the Reign at Toyota Arena.

The Barracuda are coming off a 6-0 win on Sunday in Tucson, its first victory over the Roadrunners in four games, and its largest margin of victory this season. The six goals for and four goals in the second period, were both season highs.

The Barracuda have now scored 3+ goals in three consecutive games for the first time since it did it in its first four games of the year. It’s not for a lack of talent, but the Cuda have struggled to consistently produce offense this year, but Sunday might have been the turning point. The power play also awoke over the weekend, scoring three times in two games. Entering Saturday, the team had produced just four goals in its first 13 games on the power play. Additionally, before Sunday, the Barracuda were the only team in the league to not have a goal scored from a defenseman. That changed in Sunday’s win as Artemi Kniazev netted the Barracuda’s first shorthanded goal this year.

Bordeleau now has five points (3+2=5) over his last three games and ranks T-second among first year players in goals (7).

Sunday’s shutout win was the team’s third of the year and the first for Eetu Makiniemi in a Barracuda sweater. Each goaltender to play in a game this year for San Jose (Aaron Dell, Strauss Mann, Makiniemi) has collected a shutout. The Barracuda already have more shutouts (3) through its first 16 games than it did all of last year (2). As of Tuesday, the Barracuda are now sixth in the AHL in goals against (2.80).

The stinginess will need to continue as the Cuda take on the Reign on Wednesday, and although Ontario has been struggling a bit lately, they're still a tough out, especially in their own building. Prior to its 3-2 win over Henderson on Sunday, Ontario had dropped five in a row (0-4-0-1). During the skid, Ontario averaged just 1.8 goals per game and were allowing 4.2 goals against for per game. In the team's first eight contests, in which the club went 7-1, Ontario average 3.75 goals for per game and 1.75 goals against.

Just today the Sharks recalled goaltender Dell, and in turn, the Barracuda recalled Mann from Wichita. Mann has played in each of the first two games against the Reign this season.

Our pregame coverage on Wednesday will begin at 6:30p at SJBarracuda.com/listen, the Sharks+SAP Center App and AHLTV.com. That will do it for this edition of Nolly’s Notes. Thanks for reading and so long until next time.

Back to All
Image Gallery