SAN JOSE (July 24, 2021) – The San Jose Sharks (@SanJoseSharks) concluded the 2021 NHL Draft today making nine selections overall, following the selection of William Eklund in Round One with the 7th overall selection on July 23.

With their first selection on Day Two, the Sharks selected goaltender Benjamin Gaudreau (@BenGaudreau03) from Sarnia (OHL) in the third round (81st overall). Gaudreau, who was ranked second among all North American goaltending prospects, did not play in the Ontario Hockey League during the 2020-21 regular season due to the COVID-19-related shutdown. However, he represented Team Canada at the U-18 World Championships, where he was named the tournament’s top goaltender and helped lead Canada to the gold medal. In the tournament, he posted a 5-0 record, a 2.20 goals-against average and a .919 save percentage. 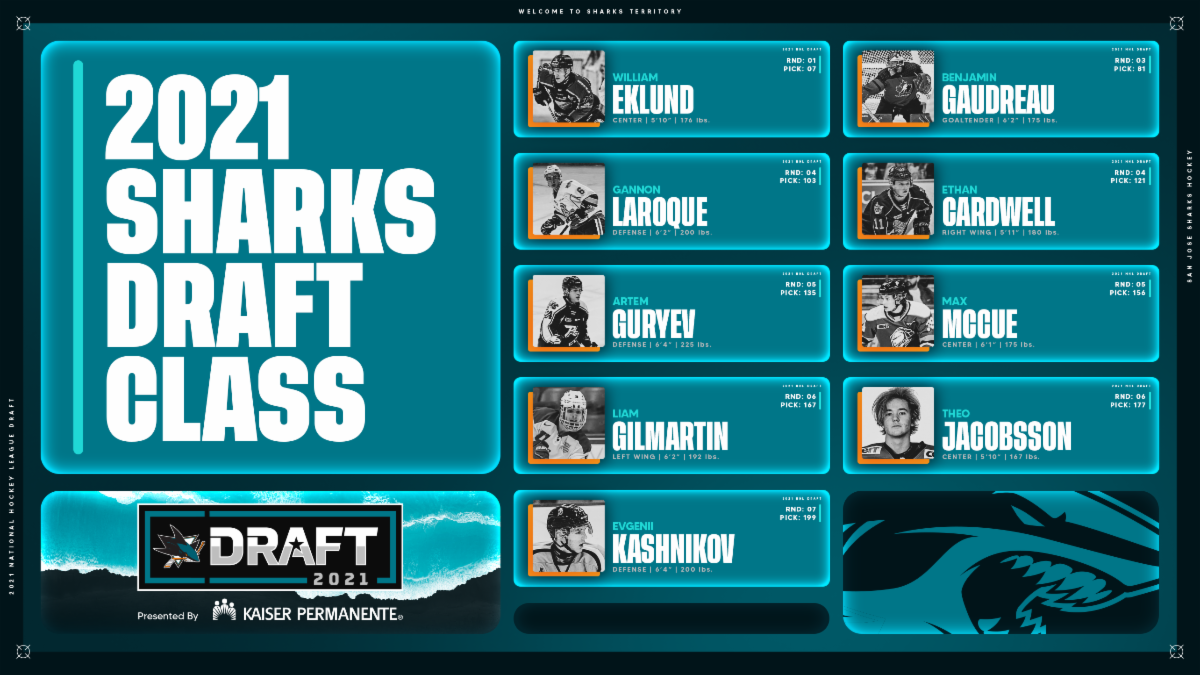 In 2019-20, he played his first season in Sarnia, where he posted 10-13-2 record in 28 games while sharing goaltending duties. Prior to joining Sarnia, he spent his U-16 season playing against older competition in the Great North Midget League in Northern Ontario. Gaudreau won all 20 of his starts, including five shutouts, while posting a League-best 1.13 goals-against average – the best mark since the GNML began tracking it. He also won a silver medal at the Canada Winter Games, with his only loss of the entire season coming in the championship game against Quebec.

The six-foot-two, 175-pound native of Corbell, Ontario was selected in the first round (7th overall) by Sarnia in the 2019 OHL Priority Selection Draft.

In the fourth round (103rd overall), San Jose selected defenseman Gannon Laroque (@LaroqueGannon) from Victoria in the WHL. Laroque, a six-foot-two, 200-pound native of Edmonton, appeared in 21 games last season with Victoria, collecting seven points (one goal, six assists) and 30 penalty minutes. He was named as the team’s 2020-21 Top Defenseman in his first full WHL campaign. He also appeared in four games with Spruce Grove of the AJHL, posting two assists.

In 2019-20, he predominantly played with Northern Alberta X-Treme Prep, where he had 34 points (seven goals, 27 assists) and 54 penalty minutes in 34 games. He was ranked 219th by NHL Central Scouting amongst North American skaters.

With their second, fourth round selection at 121 overall, the Sharks selected RW Ethan Cardwell (@EthanCardwell2) from Barrie in the Ontario Hockey League. Due to the COVID-19 pandemic, Cardwell, a 5-11, 193-pound forward spent the 2020-21 season playing with Surahammars in the Hockeyettan in Sweden. In 18 games, he picked up 27 points (nine goals, 18 assists) and 22 penalty minutes.

He was ranked 159th amongst all North American skaters by NHL Central Scouting. Cardwell’s grandfather, Steve, played in the NHL with Pittsburgh and appeared in 33 games with the San Francisco Shamrocks during the 1977-78 season.

In the fifth round (135th overall), San Jose selected defenseman Artem Guryev from Peterborough in the Ontario Hockey League. Due to the COVID-19 pandemic, Guryev did not play last season. During the 2019-20 season, the six-foot-four, 225-pound native of Moscow, Russia split time between Peterborough and Lindsay of the Ontario Junior Hockey League (OJHL). In 14 games with Peterborough, he picked up two assists in 14 games and in 20 games with Lindsay, he added six points (three goals, three assists) and 66 penalty minutes. He was selected by Peterborough in the second round of the 2019 OHL Priority Selection Draft.

Guryev was ranked 99th by NHL Central Scouting amongst all North American skaters.

With the 156th pick overall in the fifth round, the Sharks selected center Max McCue (@maxmccue93) from the London in the Ontario Hockey League. Due to the COVID-19 pandemic, the six-foot-one, 175-pound McCue did not play last season. In 2019-20, the native of Sudbury, Ontario played in 34 games with London, posting six points (two goals, four assists) and 22 penalty minutes. He also represented Team Canada Black at the 2019 World Under-17 Hockey Challenge, scoring two goals in five games. In 2018-19, he picked up 41 points (14 goals, 27 assists) in 24 games with the Sudbury Minor Midget AAA club. He was selected by London in the second round of the 2019 OHL Priority Selection Draft.

McCue was ranked 114th by NHL Central Scouting amongst all North American skaters.

With their first sixth round pick (167th overall), the Sharks selected LW Liam Gilmartin who is committed to play for London in the Ontario Hockey League next season. Last season the six-foot-two, 192 pound forward played with the United States National Development team, where he collected 35 points (13 goals, 22 assists) and 64 penalty minutes in 50 games. He also played in 23 games with the US National Development team in the USHL, posting 15 points (seven goals, eight assists) and 33 penalty minutes and represented the USA at the IIHF U18 World Championship

Gilmartin, who was born in Heidelberg, Germany, was ranked 126th by NHL Central Scouting amongst all North American skaters.

With the 177th selection in the sixth round, San Jose selected center Theo Jacobsson from Modo Jr. in the Swedish Jr. league. Last season, the 5-10, 167-pound forward split time in Sweden between Modo, Modo Jr. Modo J18 and Ornskoldsvik in Hockeyettan. He is committed to attending the University of New Hampshire.

Jacobsson was ranked 103rd overall by NHL Central Scouting amongst all European skaters.

With their final selection in the 2021 NHL Draft, the Sharks selected defenseman Evgenii Kashnikov from Gatineau of the QMJHL at 199th overall in the seventh round. Last season, Kashnikov played in eight games with Gatineau, posting five points (one goal, four assists) and also played in 22 games with AKM Novomoskovsk in the MHL, notching 10 points (five goals, five assists).

He was ranked 130th overall by NHL Central Scouting amongst all North American skaters.

A complete list of the Sharks selections in the 2021 NHL Draft can be found here.

Downloadable interview files with Sharks hockey staff and draft picks can be found at the links below.