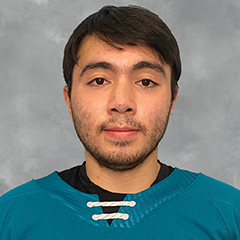 • Named to the ECHL All-Rookie Team

• Made his professional debut and scored his first professional goal with the Allen Americans (ECHL) on Dec. 18, 2020 vs. Rapid City Rush

• Assistant Captain with Kitchner • Finished second on the team in points (87), assists (55) and fourth in goals (32) • Played both forward and defense throughout his four seasons in Kitchner

• Played soccer and figure skated as a kid