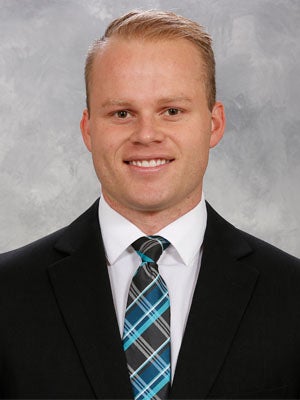 Nick Nollenberger returns for his fourth season as the media relations and broadcasting manager for Sharks top affiliate.

A 10-year San Jose Jr. Sharks alum, Nollenberger spent the previous season as the Director of Broadcast and Media Relations for the Odessa Jackalopes of the North American Hockey League (NAHL).

Before Odessa, Nollenberger served as the Assistant Director of Broadcast and Media Relations for one season with the Kannapolis Intimidators, Class ‘A’ affiliate o f the Chicago White Sox.

The Santa Cruz, CA native graduated from the University of Arizona in 2014, earning a degree in Broadcast Journalism. While at the U of A, Nollenberger served as the radio voice for the school’s hockey team for three seasons.

Nick will broadcast all Barracuda games on AHL TV, the Sharks+SAP Center app and through Mixlr streaming service.

Favorite Throwback Hockey Jersey: Mighty Ducks (because of the movies)

Favorite Hockey Memory: The Sharks making it to their first ever Stanley Cup Final in 2015