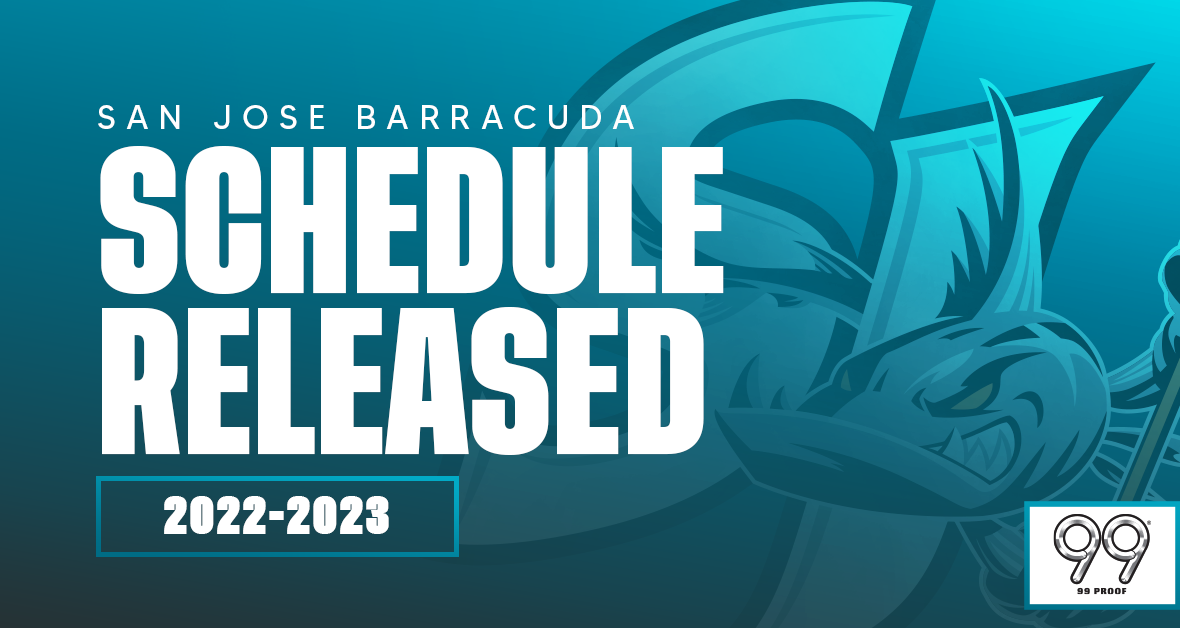 The Barracuda will play 36 regular-season home games at the brand-new state-of-the-art Tech CU Arena (@TechCUArena), which is set to open to the public in late August. Click the button below for the full 2022-23 Barracuda schedule. Click here for a downloadable schedule.

For the first time since the inception of the Pacific Division in 2015, every team in the league will play 72 games in 2022-23.

San Jose is scheduled to open the season with a pair of contests against the Iowa Wild in Des Moines on Fri., Oct. 14 and Sat., Oct. 15 before returning to the Bay Area for its first two regular-season games ever at Tech CU Arena against the Henderson Silver Knights on Sat, Oct. 22 (6 p.m.) and Sun., Oct 23 (3 p.m.). Click here to join the Battery today and become an inaugural season ticket holder at Tech CU Arena.

San Jose will make its first and only trip to Alberta on Sun., Nov. 6 and Tues., Nov. 8 to take on the Flames top affiliate which announced its relocation from Stockton to Calgary in May.

The Barracuda’s longest home stand this season is six games from Nov. 29 to Dec. 11. The team’s longest road trip will span five games and will occur twice.

The Barracuda will play eight games against Central Division teams in 2022-23, four against Iowa and four against the Texas Stars.

A 2022-23 San Jose Barracuda promotional schedule will be released at a later date.

The Sharks are hosting the 2022 Rookie Faceoff at Tech CU Arena and Sharks Ice at San Jose from Sept. 16-19, 2022 and includes four teams from the Pacific Division (Anaheim, Los Angeles, San Jose and Vegas) and two from the Central Division (Arizona and Colorado). The tournament, which features the top prospects from each participating club, was held in Arizona in 2021, Anaheim in 2019 and Las Vegas in 2018. This past tournament featured several Sharks and Barracuda players including Jasper Weatherby, Ryan Merkley, Santeri Hatakka, and Artemi Kniazev. For more information about the Rookie Faceoff, tournament passes, scheduling and more, click here.