The Barracuda’s next Saturday home game is set for Dec. 11 against the Abbotsford Canucks. Dec. 11 will also mark the team’s annual Teddy Bear Toss game. Fans are encouraged to bring new bears with them to the game and when the Barracuda score their first goal, fans can toss their bear onto the ice. The bears will be collected and donated to various organizations in the Santa Clara County in the following weeks by players and staff.

One of the most popular promotions returns in 2021-22 as the Barracuda will host a pair of Pucks and Paws Nights on Sun., Jan. 23 (5 p.m.) against Bakersfield and Sun., Mar. 6 (5 p.m.) against Tucson. Fans can bring their dog to the game by purchasing a special dog ticket. Mar. 6 will also be Hockey Fights Cancer Night.

More theme and promotional nights will be announced later. 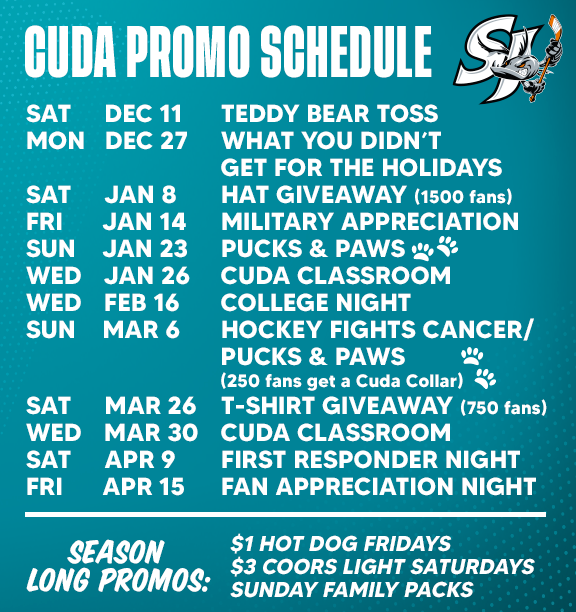 Win a trip to Las Vegas to watch the Barracuda play:

Join the Barracuda in Vegas from Feb. 2-4, 2022, as they take on the Henderson Silver Knights.

The trip includes four roundtrip Southwest airlines flights, two nights’ accommodation at the Bellagio Hotel and Casino (2 double rooms / two nights), four tickets to the San Jose Barracuda vs. Silver Knights game on Wed., Feb. 3, four Barracuda jerseys, hats and t-shirts, food and beverage gift card for the game and transportation to and from the game.